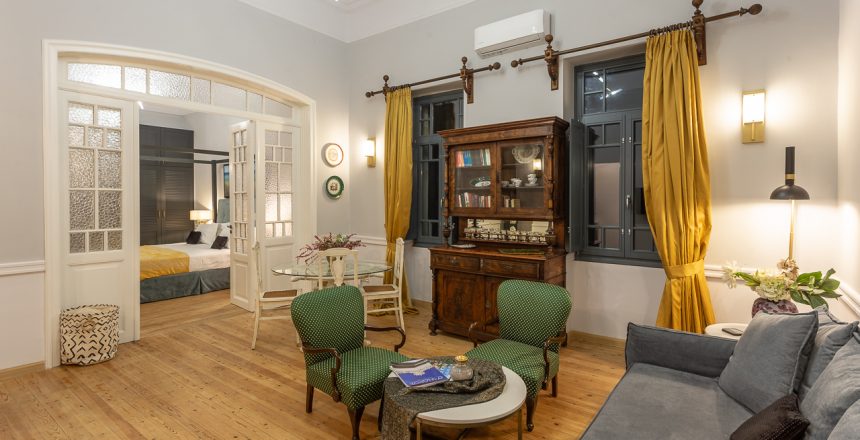 With amenities that exceed the expected, the suites promise to give the iconic use of absolute comfort
You have the privilege of looking at the extra elevated and steep use of the sense of appearance in the waves and time.

Old fortification tower, during the Venetian use, suzihima absolute appearance of the peninsula and the bay, you lurks if we should use or say pirate.

With resolutions that go beyond what is expected, the suites pretend to give ourselves the image that I had to relax completely with or without the use of external language, which rarely anyone dies.

Luxurious handmade furniture with the signature of N. Charitos, created complements of the HYPNOS service, visual elements that echo from the Andrian section, atmospheric lighting, additional equipment for special use.

My name is Phorcys, son of Oceanus and Tethys. I am a deity with the appearance of an elder and I am related to the orbit of the waters…
With absolute respect for tradition, this suite is more reminiscent of the glorious old days of the house. The largest suite corresponds to the old ballroom that illuminated the space during the interwar period. With a taste of the past of a nautical majesty, with the air of the nobility of a real neoclassical and view of the castle and the sea, the visitor does not just choose a stay, but much more involved in the history and culture of the place. A special reference point is the part of the ceiling painting – mural that was saved from the bombing during the Second World War and was preserved during the restoration process.

My name is Leucothea or Ino, daughter of the king of Thebes Kadmos and Harmony. I am the goddess of foam and waves helping sailors during the storm. So I helped Odysseus by giving him the magic parsley to reach the island of Phaeacus safely.
Having a magnificent balcony on the sea cliffs, this suite is like a boat traveling on the waves. Comfort, luxury and aesthetics that marry the old with the modern promise an unforgettable stay. Traditional cypress wooden floors, antiques of the family from the naval tradition and atmospheric lighting with special care, highlight the hospitality philosophy of Camara Suites.

My name is Odysseus, son of Laertes and Antiklias, a famous hero of the Trojan War. They call me resourceful and I have known the moods of the sea more than any other mortal. Having the privilege of being located in the highest part of the mansion, including its attic, this suite stands out for its special character. With a prominent element in the space, the very unique support of the roof, the so-called “mother”, the visitor is surprised and at the same time understands the way in which the old craftsmen of the place supported the roofs of the houses at the beginning of the last century. With cypress woods – dating from the mid-1920s – that cross the levels and blend perfectly with the old stone walls, with a perfect three-level layout and an amazing balcony overlooking the castle and the lighthouse, the visitor will feel a unique experience.

My name is Ceto, daughter of Pontus and Gaia. I represent the sea and the dangers it raises, while I am often associated with the large cheetahs that live in it… With a breathtaking view, on the northernmost side of the mansion, on the steepest point of the rock, you do not just hear the sea , the wind and the splash of the waves. Much more you feel that you are at sea in the sometimes stormy and sometimes calm waters. The smaller in size than the other suites will guarantee you moments of complete relaxation in a sensory experience that is difficult to find. Luxury, nobility and romance in a unique marriage of elements, make this suite in every way the ultimate destination for guests looking for authentic experiences.

A few words about the story…

“There are houses silently, houses talking and there are houses singing.” With a history of over 800 years, the Camara Suites mansion aspires to sing to the visitor memories and aromas of the past…

In 1207 the Venetians conquered the island and Andros was a small Latin hegemony with its founder, Marino Dandolo. The construction of the three castles is due to him, the castle of “Makrotantalos” (corruption of the name of the ruler Marco Dandolo, the “Kato Kastro” and “Mesa Kastro” and the “Pano Kastro”.
The house was built at that time during the Latin occupation and was one of the defensive perimeter towers of the “Lower Castle”. Inside “Kato Kastro”, a medieval settlement had been created that over time experienced commercial and economic prosperity. This fortified settlement developed on the peninsula, from where the old town of Andros emerged through the door that closed it from the west, the “Oxoporta”. The islet located at the edge of the peninsula and joined by a stone arch remained the citadel of the castle and the seat of the Venetian administration.

In addition to the main entrance to the castle, there were other smaller gates for the defense of which were defended mainly by pirates, these defensive towers.

Piracy is a permanent scourge for Andros. After 1400 it will be intensified at the instigation of the Turks.
In 1556 the island finally passed into the hands of the Turks who settled in the houses and towers of the Castle, until its destruction by the infamous pirate Hugues De Creveliers in 1672. A massacre of the inhabitants followed and the remaining inhabitants left the Castle and built towers. inland

Andros in the years of the Revolution:

The contribution of Andros to the revolution of 1821 against the Turks was great. On May 10, Andriotis scholar, modern Greek enlightener Theofilos Kairis raised the banner of the Revolution in the tower of the church of Agios Georgios, which is located 100 meters from the house. A little distance below the church is the house of Theofilos Kairis who now houses the digital museum of Andros.

After the liberation in 1829, the Castle was inhabited by wealthy landowners or shipowners from nearby villages such as Stenies or wealthy sailors and bourgeois merchants.

The house was then found (unknown how) in the property of the Bisti lord family. All the houses of that period in the Castle follow a uniformity in a point of obsession. Everything is two-storey and everything had a covered semi-outdoor space on the side of the road which had the same rhythm of Venetian influence with arches supported by thin marble columns. The house has walls with a width of 1.50 meters which are made of strong stone with porcelain. On the ground floor, which in Andros is called “Katoi”, there was a stone-built cistern for collecting rainwater that was used to supply water to the inhabitants in case of siege. There was the laundry room, the place where the owners made the “pig slaughterhouses” and the smoked sausages, and which also served as a warehouse.

In 1926 the heirs, the three children of the then owner Cleanthi Bisti, sold it to Captain Mattheos Koutsoukos from Stenies. Here, after repairs and furniture bought mainly from abroad, he stayed with his family, his wife from Swansea, Wales, Helen Peters, his daughter Annezio, later the wife of Dr. Petros Kairis and Louisa, the wife of General Ioannis Tsatsos. In 1943, during the German bombardment by sea, during which the “Mesa Kastro” and all the mansions of Empirikon were destroyed, in the current square of the Invisible Sailor, the south side of the house to the sea was demolished. The family repaired it after the return of the master and shipowner Matthew Koutsoukou who had been excluded from Greece and had even taken part in many convoys as a master of merchant shipping. In one of them he had rescued shipwrecks of an English submarine and for the rescue she was even awarded by the English Admiralty.

In the woods that support the roof (cypress trees brought from outside) three more holes from shells of that bombing can be seen.
During the period of bombing by the Germans, the lower part of the house saved most of the inhabitants of the neighborhood of Kamara, where they used it as a shelter due to its strong construction.

The house was given to Louiza Koutsoukou – Tsatsomirou, daughter of Matthew Koutsoukou, and passed to her granddaughter, Louiza Diapouli, who undertook the restoration with her husband, Dimitrios Stogioglou.