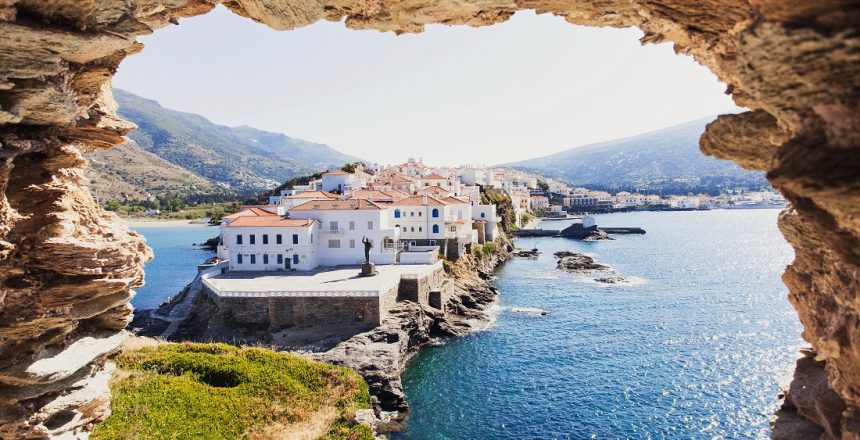 In his influential work, Megas Anatolikos (Great Eastern), surrealist poet Andreas Embirikos describes the island as the “I nissos i ekpaglos” (the exquisite isle) hiding his own pride and source of inspiration in the lips of his hero. When the wind blows, you know that you are in the Cyclades, and if you come it will be love forevermore. You may have heard of its springs, but its green slopes are a surprise as they do not reflect the expected Aegean landscapes. The well-travelled people of the cosmopolitan island take pride in its nobility, but it continues to remain traditional. It will win you over with its crystal-clear cold waters, its local cheese, its scenic villages, and beauty revealed everywhere you look.

“You may have heard of its springs, but its green slopes are a surprise as they do not reflect the expected Aegean landscapes”

The Chora of Andros is one of the classiest in all of the Cyclades. The island’s picturesque main town is located on a narrow peninsula on the island’s east coast. A main road lined with cafés and shops selling local products runs through the main town all the way to the Statue of the Unknown Sailor. Directly opposite, look out for a short, arched stone bridge that connects the main island with an islet. The remains of a Venetian castle that once stood on the islet are still visible. Housed in a lovely mansion, the Maritime Museum of Andros features an extensive collection that portrays the island’s rich naval tradition. Also of note is the Kairis Library for its collection of rare publications, manuscripts, and, of course, a collection of the work of the prominent 19th century priest, philosopher, scholar and politician Theofilos Kairis, after whom the library was named. Finally, drop by the Andros Museum of Contemporary Art which hosts exceptional exhibitions every summer.

Ahla, featuring golden sand; the more isolated Ateni; Tis Grias to Pidima, where a huge rock sits on one side; rugged Zorko beach; turquoise-watered Vitali; Batsi, a beach that gained wider exposure in Greece through an award-winning film, “Girls Under The Sun”; classy Niborio, cosmopolitan Hrysi Ammos, and serene Fellos beach, each one different from the other are reason enough to visit the island.

Andros’s landscape cannot be regarded as being typically Cycladic. The blue sea blends with rugged rocks and lush green hillsides. Walking trails meander through beautiful surroundings, crossing mountain slopes, creeks and little villages. Along the way, expect to encounter babbling natural springs as well as waterfalls that adorn the slopes.

A trip to the amphitheatrically developed Stenies, a village featuring superbly preserved mansions owned by prominent shipping families, comes highly recommended. For a more cosmopolitan feel, head to Batsi and take a stroll. Paleopoli is made particularly interesting by its archaeological discoveries through the excavation work of archaeology professor Nikolaos Kontoleon in 1956. Traces of the ancient city, pottery, sculptures, and a Hermes statue were all unearthed by the effort. In Sariza, known for its springs, the fresh water may be enjoyed amid the area’s lush green surroundings.

Pay a visit to the Aghia Marina monastery church in Apikia. The monastery was closed in 1833, along with a further 416 monasteries in Greece, following a decree issued by Otto of Greece, one year after he was appointed the first modern King of Greece. The Aghia Marina monastery houses a famous icon of the Virgin Mary, said to work miracles, which was purchased by the Embiricos shipping family at an auction held to save the relic. The monastery was reopened in the 70s. The Zoodohou Pigis (life-giving spring) monastery, the island’s largest, is equally impressive. Rare relics dating back to the Greek War of Independence (1821-29) and sacred items are kept here. Finally, visit the Panaghia Panahrantou monastery, built during the reign of Byzantine Emperor Nikephoros II Phokas in the 10th century. Here you’ll find another miracle-working icon of the Virgin Mary and other relics.