The Religious side of Andros 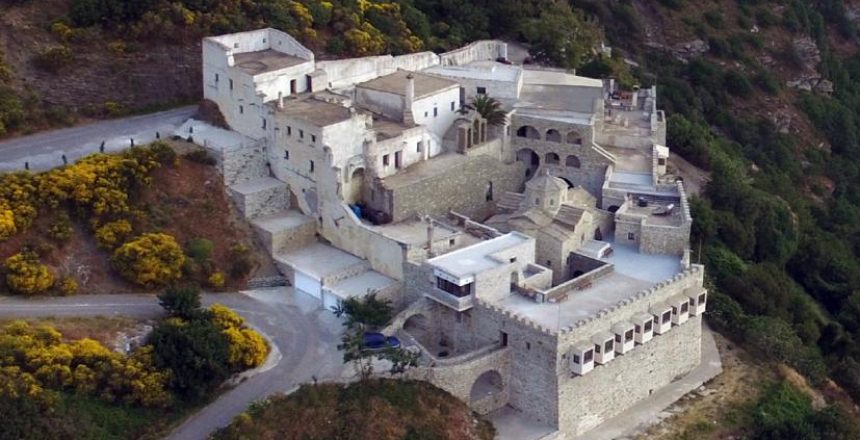 Panachrantou Monastery is located on the slope of Mount Gerakones and is the most beautiful Byzantine monastery of Andros. According to the tradition, it was built by the Emperor Nicephorus II Phocas (963-969), upon his return from the victorious campaign against the Arabs in Crete. The monastery houses the miraculous icon of Virgin Mary, rendered by St Luke. This monastery also possesses the relic skull of St. Panteleimon, which was transferred there from Constantinople in 1705. In Panachrantou Monastery monk “Papoulakos” was imprisoned. The monastery, which was recently renovated, is celebrated on July 27th (St. Panteleimon’s day) and on August 15th. Abbot of the monastery is Father Evdokimos Fragoulakis, who serves there since 1957.
Location: Near to Chora and just above Falika village.
How to get there: Following the road from Falika village. Alternatively, you can follow the road from Chora to Korthi and turn towards Vouni village (check relevant road signs). The distance from Chora is 4 km and from Korthi 13 km.
Contact Info: (+30) 22820 51090 – http://impanahrantou.blogspot.gr

AGIA MARINA (ST. MARINA) MONASTERY
Agia Marina’s monastery is located north of Chora and was recently renovated. The monastery dates from 1325, when Agia Marina shows herself to an elder monk at Litres region and indicates him to find her icon in a slot of a rock… And so it happened. During the 16th century, the monastery is burned three times from the pirates, but monk Sofronios fully refurbishes it by selling his property in Peloponnese. He converted it to a convent, hosting up to 100 nuns. In 1833, 417 monasteries in Greece are closing by order, among which Agia Marina. Embirikos family bought the miraculous icon and transfers it to the Church of Virgin Mary in Chora. In 1975, Dorotheos, Metropolitan of Syros, asks Deacon Kyprianos Chimonas to restore the monastery and the latter follow his will. The monastery became widely known by the miraculous healing of a small child from Cyprus.
Location: North of Chora, in a 4 km distance from Apikia region.
How to get there: Follow the road from Chora to Apikia and turn left at the intersection that leads to Ypsilou and Strapourgies villages. Then take the road on your right towards the monastery. There are relevant road signs.
Contact Info: (+30) 22820 24074

Agios Nikolaos monastery, with its  an elaborate architectural structure, is perfectly maintained. According to tradition, the monastery was built during the 11th century, while in 1760 extensive repairs were made. The monastery is fortified with high walls and the katholikon is cross-in-square type, two-columned with narthex and a dome. There are many chapels inside the monastery. Here are kept the relic skull of Saint Nicholas of Vounenois, the jawbone of St. Kosmas Aitolos, part of the skull of St. Joseph of Arimathea and many other relics. The Monastery was annex of “Filiki Eteria” and served as a printing and bindery house, as well as “Krifo scholio” (Secret School) during the Turkish occupation, due to its outermost location. Monastery’s iconostasis is unique and holy water spouts from the altar. The monastery’s wooden screen is superb, while there are also traces of frescoes.
Location: North of Apikia and before Vourkoti village, in a 10 km distance from Chora and 25 km from Batsi.
How to get there: Follow the road from Chora to Apikia and turn right after Apikia and before Vourkoti village. There are relevant road signs.
Contact Info: (+30) 22820 22190

SAINT IRENE CONVENT
The convent of (Agia) Saint Irene was built in 1780 by two monks, brothers from Arpahtouria in Kato Apoikia. In 1843, the convent was abandoned. Around 1990, Eleftherios Polemis took the initiative and started restoration of the derelict convent. A stone-built church (cross-in-square with dome) with its marble screen, built in 1806 and part of the stone wall surrounding the church can still be seen. Inside the church, the miraculous icon of Saint Irene (created c. 1800 A.D) is kept. The icon depicts Saint Irene and Saint Irene Chrysovalantou. The convent celebrates on 5 May and 29 July.
Location: Apoikia, altitude 350 m, about 6 km from Chora.
How to get there: Starting from Chora take the road Apoikia-Vourkoti. Pass the village Apoikia and the convent is on your right.
Contact Info: (+30) 6982038281 – www.imagiasirinisandrou.gr

It is the largest monastery in Andros. Locals also call it “Agias” and its celebration day is the first Friday after Greek Orthodox Easter Sunday. The date of its construction remains unknown. According to the tradition was used as a school and became a monastery in 842. It hosts rare icons of the 14th and 16th century, a rich library with books and manuscripts, as well as a museum with holy vessels and vestments. There is also a small collection of prehistoric tools. The monastery is officially recorded for the first time in 1400, while the chapel contains an icon dated from 1325. In 1928 the monastery was converted into a convent.
Location: Between Gavrio and Batsi.
How to get there: Following the road from Gavrio to Batsi, after Kypri beach and just before Agios Kyprianos, turn left and follow the uphill road that takes you to the monastery. The distance from Gavrio and Batsi is 7 km, while from Chora 33 km.
Contact Info: (+30) 22820 72459

for your stay in Andros