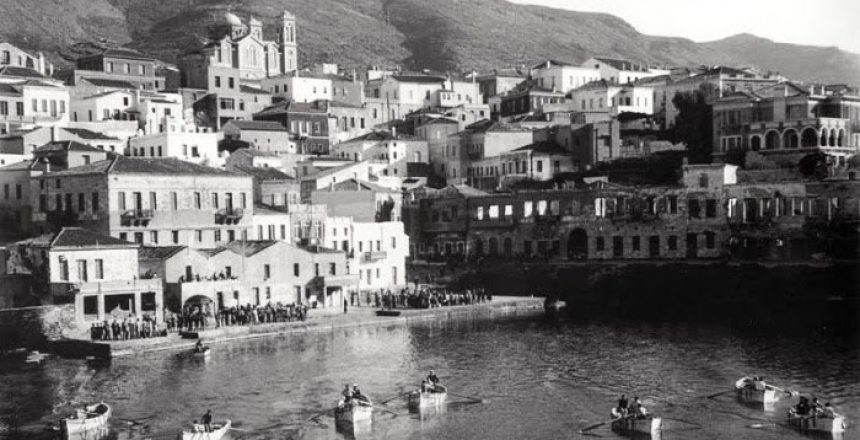 Andros is the northernmost island of Cyclades and second in area after Naxos.

It has an area of 374 square kilometers and longitudinal shape in a N-NW to S-SE direction. Its highest mountains are Petalo and Kouvara (maximum altitude of 997 m., highest peak is Profitis Ilias).

The locals often call Andros “Rock”, both due to its rocky coastline and the islets surrounding it. An indicative example is the Gavrionisia complex, located on the west side of the island, just off the port of Gavrio, and is composed of: Aladonissi, Prasonissi, Lagonissi and Megalo Nisi. Theotokos islet lies on the east side, north of the capital (Chora).

The subsoil is almost exclusively composed of crystalline schist, “blessing” the island with rivers, creeks, streams and many springs. Hence, there are many oaks, planes, olive trees, cypresses, walnut trees and lemon trees, mainly in the S-SE side. Plentiful water and rich vegetation are also responsible for Andros ancient names: Ydrousa, Lasia, Nonagria and Epagris.

On the island’s steep coasts feral pigeons and mourning doves are flying, while Monachus monachus resides in some of them. A common characteristic of the island’s territory is “aimasies”, as locally called. These berms are supported by stone walls (the famous “xerolithies”), which are used to form flat arable surfaces.

The island has three ports, two on the west and one on the east side. The main port is Gavrio, with regular connections from Rafina. Batsi port, located just few kilometers away, hosts mainly private boats. The port of Chora is used mainly as a marina for private boats and fishing vessels.

According to the prevailing view, that of Diodorus of Sicily, the island took its name from Andros, General of Radamanthys, king of Crete, a fact which also proves that Andros was under Cretan sovereignty, like the other Aegean islands.

Due to its location, Andros was a strategic point in almost all periods in history. Recent excavations at Cape Strofila revealed a prehistoric settlement belonging to the Neolithic Period (4500-3200 BC), with numerous rock paintings. The settlement has been characterized as the most important of this period and the best preserved in the Aegean (refer to “Sightseeing” section for more information).

A little further south, Zagora – one of the best preserved Greek settlements of Geometric period (900-700 BC) – is also being revealed. Finds from the Bronze Age (200 BC) can be found in the area of Plaka (south of Zagora), as well as in the archaeological site of Ypsili.

During the Classical period, Palaiopolis, the Capital of Andros , is believed to have been surrounded by fifty settlements.. Rich coinage proves the prosperity of that period. The Archaeological Museum of Chora houses relevant finds , such as Hermes of Andros and others from Zagora.

Since 11th and 12th century, Andros grows rapidly. It becomes world widely known thanks to its silk products and commercial shipping. This period of prosperity has offered excellent examples of religious architecture, such as the churches of Taxiarches in Messaria, Melida, Ypsilou and Kimisis Theotokou in Mesathouri. At the same period -and a bit later- Zoodochos Pigi, Agios Nikolaos and Panachrantou monasteries were built.

Since 1813, Agia Triada in Korthi hosted probably the only pre-revolutionary school of Andros, founded by Samuel Plasimis. A building that housed the tutors, as well as a noteworthy library section, is preserved next to Agia Triada.

During the Ottoman occupation a popular saying was born: “If you dare Uncle Lampros, come again by Andros”, referring to the defeat of Lampros Katsonis in the naval combat of Andros. On May 10th 1821, Theophilos Kairis raises the flag of revolution.

In modern times Andros, despite the setbacks of the First and Second World War, will be found at the top of commercial shipping and economic prosperity. In 1939, Andros was second in number of ship registration, after Piraeus. It’s worth mentioning that, in the early 20th century, Andriot ship owner Dimitris Moraitis launched the Greece – North America sea route.

The Second World War caused significant losses on the island, both in lives and ships. In the late 1950s a large emigration wave began, both to the major urban centers of Athens and Piraeus, as well as abroad (mostly in USA), reducing the island’s population dramatically. During the last 2-3 decades, the island began to grow again, focusing mainly on tourism. Its natural beauty is unique, it has great culture and its biggest advantage is that it is the nearest Cycladic Island to Attica.