10 Sightseeings you should see during your vacations in Andros 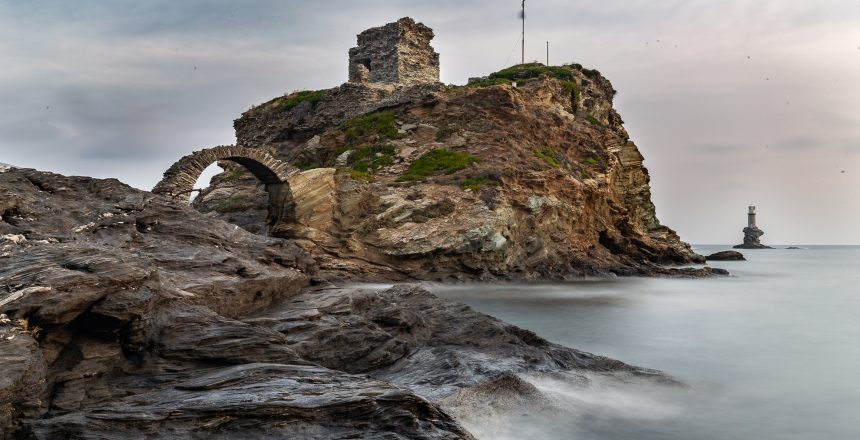 ALADINO CAVE
The cave at Aladino village -4.5 to 5 million years old- is one of the top attractions of Andros and has an area of approximately 500 m2. It consists of five halls, four of which are open to the public. It was discovered in 1932 by Ioannis Petrohilos and mapped later on in greater detail. The cave is an impressive spectacle composed of stalactites, stalagmites, helictites, hanging rocks and colorful limestone.
Location: Just before Chora, at Aladino village.
How to get there: By car. Follow the main road from Stavropeda to Chora. Turn right onto the bypass of Messaria and then right again to Aladino and Falika villages. There are relevant road signs.

THE CASTLE OF CHORA
It is one of the most important monuments in the capital of Andros. This famous castle was the fortified residence of the Venetian ruler Marino Dandolo, when he conquered the island. It was built in 1207. The towers and barracks of the castle, as well as the Venetian rulers’ coats of arms, were well preserved until 1943, when the ferocious bombing by the Germans destroyed it completely. Nowadays, one can only see its ruins.
Location: At the waterfront of Chora, in the Unknown Sailor square.
How to get there: On foot, from Kairi square.

PYTHARA
The ravine of Pythara is located in Apikia village. According to the tradition, is also called “Neraidotopos” (“Fairy Land”). The plentiful crystal clear waters create an amazing habitat, forming small waterfalls and ponds which abound with aquatic life. The landscape is lush with rare species of plants and birds, wildflowers and several amphibians. The waters that spring from Mount Petalo in Evrousies irrigate the crops, while from 1863 until 1936 powered “Fabrica”, the Balkans largest watermill, at Stenies village.
Location: At Apikia village, just a few kilometers to the west of Chora.
How to get there: Leave the car on the main road and follow the path to Pythara. After 10-minutes walk, you will reach your destination.

SARIZA
The spring of mineral water “Sariza” is found at Apikia village and attracts many visitors due to its curative properties (it helps those suffering from kidney ailments). A few meters to the west, is located the factory where “Sariza” water and soda are bottled.
Location: At Apikia village, just a few kilometers to the west of Chora.
How to get there: At the end of Niborio quarter, in Chora, follow the road on your left to Stenies and Apikia. Those wishing to bypass Chora, they can follow the road to Strapourgies – Ypsilou, from the intersection of Menites village.

AGIOS PETROS (ST. PETER’S) TOWER
The Tower of St. Peter is of great interest for the visitors. It is cylindrical, preserved to a height of about 20 m. and was built during the Hellenistic period (4th-3rd century BC). Its base diameter is 9.40 m. and is constructed entirely from local schist. Inside there is a spiral staircase leading to at least five floors. The tower is built in a very privileged position, as it is located on the plain of Gavrio, offering control of land and sea. Around the monument there are also metal mines (copper), which functioned until the beginning of the century.
Location: At St. Peter village, in the area of Gavrio.
How to get there: By car, following the road from Gavrio to St. Peter village.

PANO KASTRO (UPPER CASTLE)
The Upper Castle, also known as “Faneromenis Castle”, was built from 1207 until 1233, by the Venetian ruler Marino Dandolo. It is located on a stunning mountain plain north of Ormos Korthiou at an altitude of 585 meters. Nowadays, some parts of the walls, as well as Faneromenis church, are preserved. The scenery is magnificent and the view to the eastern Aegean is unique.
Location: Above Kochylos village.
How to get there: Follow the main road from Korthi to Chora (or vice versa) and reach Kochylos village. From there, take the road to the bottom of the hill where the castle is located and then climb 143 stairs to the entrance.

ZAGORA
Zagora is one of the best preserved cities of the Geometric period in Greece. Its ancient settlement is located on a remote mountain plain (160 meters altitude) on Zagora peninsula. The excavations that took place from 1960 until nowadays have revealed important finds. Its life began on the 10th century BC and lasted until the end of the 8th century BC. The settlement was protected by a strong wall  approximately 100 m. long, 2-4.80 m. wide and 3 meters high. Inside there is a temple that was built in the 8th century BC and was used until the Classical Period, although the settlement had been abandoned 300 years ago. The houses were built of stone and had roofs made of earth (doma).  Remains of this settlement can be seen in the Archaeological Museum at Chora, as well as a model replica of a house and a temple.
Location: In Zagora mountain plain, on the west side of the island.
How to get there: On foot, following the relevant path from “Agia Triada” (shortly after Stavropeda) to Korthi. It’s approximately a 40-minutes walk. There are path signs and the route is very interesting.

YPSILI
The ancient city of Ypsili was discovered in the early 1980’s. Excavations have brought ancient relics to light, as well as the temple in the center of acropolis, buildings, part of the wall and a numerous antiquities. These findings are valuable for the study of Geometric and Archaic period in the Cyclades and generally in the Aegean Sea. The temple in the center of acropolis, probably dedicated to the goddess Demetra, was founded in the 8th century BC and remained active at least until the second quarter of the 5th century BC. Ypsili is the only organized archaeological site in Andros.
Location: At Aprovato village, shortly after Batsi, as we head towards Chora.
How to get there: Very easily, by car or bus. The entrance to the archaeological site is located near the main road of the island.

PALAEOPOLIS
Palaeopolis is the ancient capital of Andros, which flourished from the Classical to the Roman era. Today is a beautiful green village, located on the slopes of Mount Petalo, on which there are probably the only waterfalls of Cyclades. The ancient city was much lower, by the port, whose half sunk pier is seen from the village. Excavations initiated in 1987 and still continue. They discovered three sections of paved roads and two arcades, as well as a Hellenistic period building with monumental propylon and colonnaded courtyard inside. There are also proofs of the existence of post-classical and early Hellenistic phases of this building. The agora seems to have been deserted in the first half of the 7th century. The findings are displayed in the Archaeological museum of Palaeopolis.
Location: About halfway through the main road of the island, leading from Gavrio to Chora.
How to get there: By car or bus. Follow the main road, on which the Archaeological museum is located.

STROFILAS
This Neolithic settlement had been discovered in the area of Stavropeda, on the west coast of the island. It is the largest settlement of the Final Neolithic period found in the Aegean and extends over an area of about 25000-30000 m2. The settlement was brought to light by the excavations of the 11th Ephorate of Prehistoric and Classical Antiquities. They revealed a wall of 100 m. length, up to 2 m. height and 1.60-2.00 m. width, as well as impressive clay pots, jars, pots, stone tools, arrowheads, jewelry, figurines, bronze objects, etc. The settlement dates back to around 4000 BC and is characterized as the largest and best preserved Neolithic settlement of the Aegean. It was densely built-up with early urban structures, involving proportional social coordination. The carved rock shapes representing animals, fish, etc. are impressive, while the ship representations prove that Cycladites were wandering the seas since then.
Location: At the area of Stavropeda, in the center of the west side of the island, in Strofilas mountain plain.
How to get there: The site is not organised and you can get there only on foot. Follow the road right of Stavropeda and then left, towards the path that leads to the mountain plain.